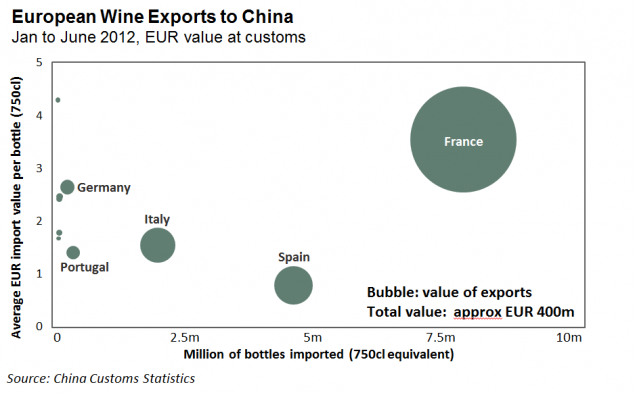 Driven by increasing purchasing power and a strong interest in foreign food and drinks, EU exports of food and beverages to China climbed by a staggering 51% year-over-year during the first six months of 2012.

Some European countries are doing better than others when it comes to capturing the growth of China’s demand for foreign food and beverages.  For example, breaking down China’s wine import figures for the first half of 2012 reveals some interesting findings. French wine makes up 77% of all wine imported to China from the EU in terms of value, and its share is increasing. In the above chart we have mapped the average import value per bottle, the number of bottles imported, and the total value of wine imported to China from the main European wine-exporting countries. In addition to being the most important exporter in terms of sheer volume, it is interesting to note that the average value of French wine is more than four times higher than that of Spanish wine and more than twice that of Italian wine.

Contact the writer of this article for more information: Carl-Johan Skoeld telephone: +86 182 2122 5546 or cjskoeld@stenvall-skoeld.com.

Stenvall Skoeld works with food producers looking to profit from the rapid growth of the Chinese market. Our support includes comprehensive market entry strategy and execution services, customer and competitor analysis, China importer and distributor search and screening, and M&A advisory services to acquirers of Chinese food and beverage companies.