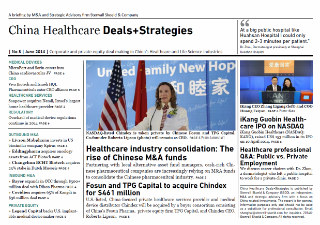 This post was originally published in the June 2014 issue of our healthcare newsletter China Healthcare Deals+Strategies.
Subscribe (email) to our newsletter to learn more about our perspectives and insights on China’s healthcare sector.

The trend has continued, with a number of Chinese pharmaceutical companies setting up or participating in different types of M&A funds investing in China’s pharmaceuticals, medical devices, and healthcare services industry.

Whereas most funds launched by large pharmaceutical companies in the United States and Europe are venture capital funds focusing on investments in relatively early stage companies with promising technologies or innovative products, the Chinese funds launched in the last couple of years are primarily growth capital funds, investing in relatively more mature growth-stage companies with proven business models.

Whereas the core corporate investors are all hoping to profit from the consolidation of China’s pharmaceutical industry, their influence on fund strategy and investment decisions varies greatly between funds. Some funds operate as typical growth capital funds. An example is the M&A fund launched by Kunming Pharma (SHA: 600422) and Ping An Securities.

With its wide investment scope covering API and finished dosage pharmaceuticals manufacturing, as well as healthcare services providers and distributors, Kunming Pharma only has limited impact on the fund’s strategy.

On the other side of the spectrum are funds like that of Aier Eye Hospital Group (SHE: 300015) and China Orient Assets Management, an M&A fund with an investment strategy closely aligned with that of its core investor. The relatively small fund has RMB 200 million in committed capital and is fully dedicated to acquisitions relating to the consolidation of ophthalmic medical services.

In addition to influencing fund strategy, the core corporate backers are often represented on the funds’ investment committees, providing them with additional input on which targets to invest in.

In addition to expecting financial returns, participating as a core investor addresses a number of strategic issues:

Participation by foreign pharmaceutical and medical device companies in the Chinese funds has been limited to venture capital funds. For example, Novartis’s (NYSE: NVS) Venture Funds participated in BVCF’s third China life-sciences fund which was launched in April 2014. purely seen as a source of money.

Both options require a comprehensive understanding of the Chinese deal making environment, a rigorous fund manager screening and selection process, and a sound fund and investment strategy. To maximize benefits, foreign limited partners in Chinese funds should play an active role, preferably, if a core investor, as part of the fund’s investment committee.