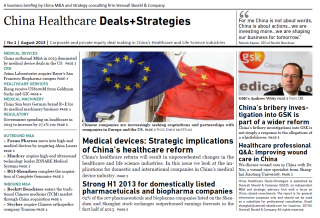 This post was originally published in the December 2013 issue of our healthcare newsletter China Healthcare Deals+Strategies.
Subscribe (email) to our newsletter to learn more about our perspectives and insights on China’s healthcare sector.

Investors have been waiting a long time to deploy money into China’s private healthcare industry. The Chinese government has been cautious (and divided) about to what role private companies should play. But the need to upgrade China’s healthcare system has persuaded the government to give private money a larger role as China’s reforms its healthcare system. The amount of money flowing into private healthcare increased rapidly in 2013. In April, IKang Guobin Health Care Group, a health-care service provider, raised US$ 100 million from Goldman Sachs and Singapore’s sovereign wealth fund, Government of Singapore Investment Corp.

One of IKang Guobin’s competitors, Ciming Health Checkup Management Group, is raising capital through a domestic listing; the company has applied to go public in Shenzhen with a plan to raise 500 to 600 million yuan (around US$ 82-98 million).

Earlier this year, another of IKang Guobin’s key rivals, Meinian Onehealth Healthcare (Group) Co., recived more
than US$ 30 million in investment from the Carlyle Group in return for a 13.5 stake in the company.

Despite the recent increase in private funds flowing into the Chinese healthcare sector, opportunities are still limited. IKang Guobin, Ciming, and Meinian Onehealth are all niche players who rely on health check services to corporate accounts for a majority of their revenues. As such, none of the companies are competing to a significant degree with China’s public hospitals.

Foreign investment in China’s private healthcare sector also remains restricted despite recent regulatory changes.
Although wholly foreign-owned hospitals and clinics are allowed by law since January 30, 2012, each individual project needs government approval. Since the law came into effect, the only foreign-owned hospital that has opened its door to Chinese patients is Shanghai Landseed Hospital, a Taiwanese invested hospital.